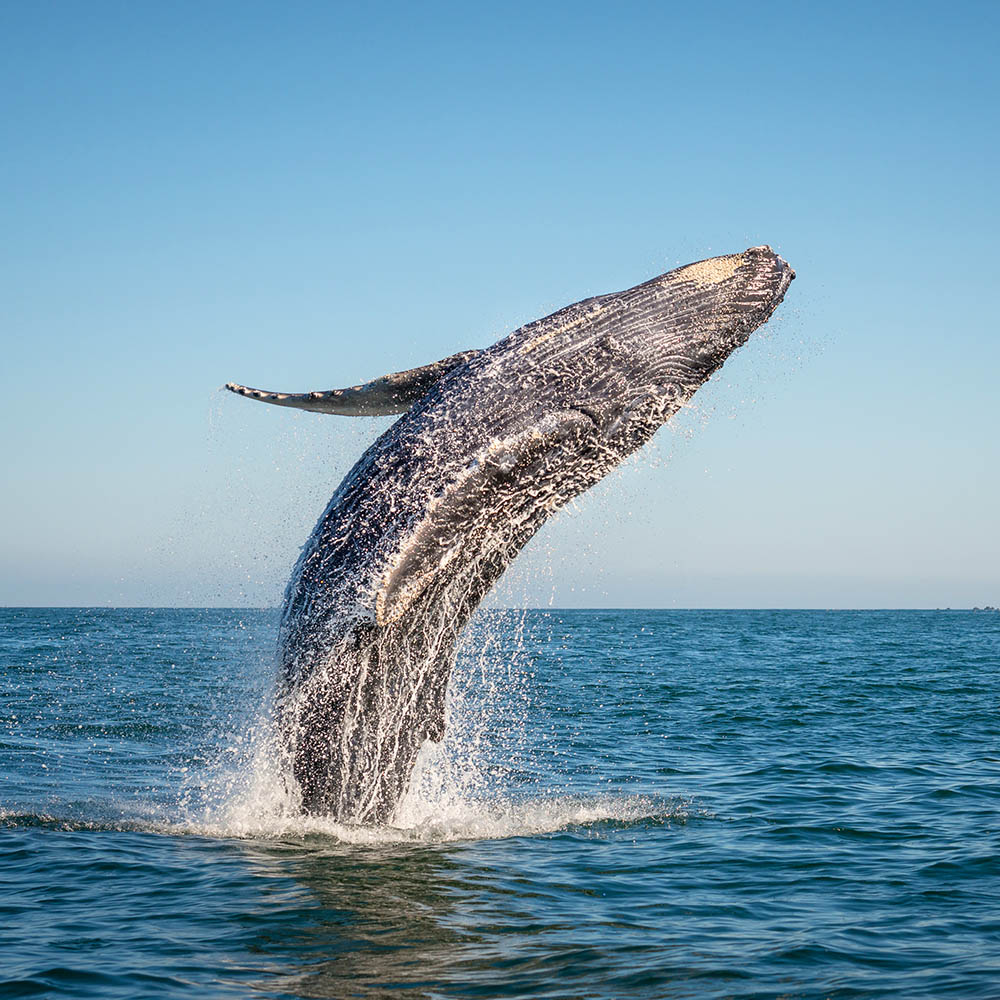 It’s that wonderful time of year once again… whale watching season in the Whitsundays! Every year, humpback whales migrate north from the Antarctic and make their way to the Whitsundays as the waters are protected, shallow and warm, to give birth, socialise and mate.

During the months of June to September whale watchers in the region can see everything from tail throws, spy hops and chin slaps, to blows and leaps above the surface while breaching… these whales can put on a spectacular display. And it’s a show at which many Australians have the opportunity to a front-row seat.

Before you head out on your whale watching adventure we’ve put together some fun facts about these majestic creatures of the ocean for you to enjoy. 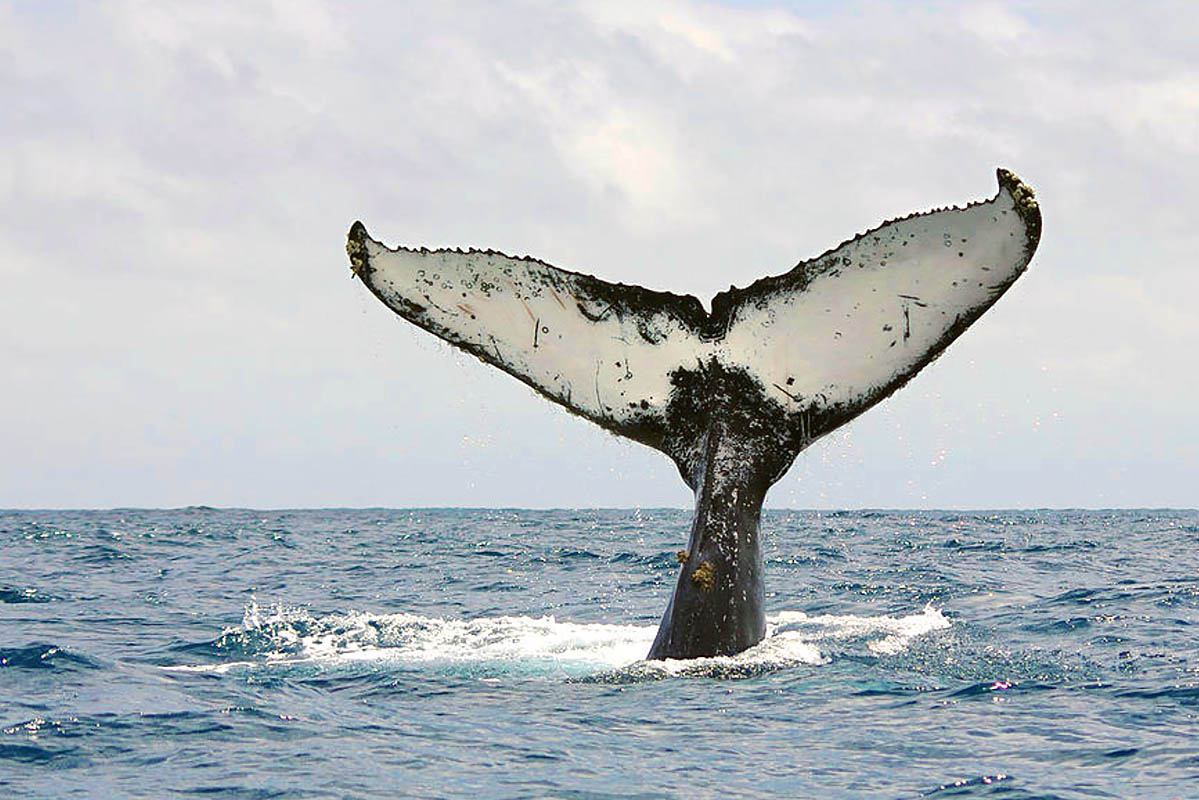 While humpback bodies are mainly black and grey in colour, the white patterns on their pectoral fins, bellies, and the undersides of their tails differ between individuals. Tails (or flukes) can grow to be 18 feet wide and are serrated along the edge with a sharp pointed tip. As distinctive as a human fingerprint, these patterns (in combination with shape, size, and scarring) have been used by scientists to identify and monitor individual whales since the 1970s. This method is also used to identify whales from different populations, since Southern Hemisphere humpbacks have more abundant amounts of white markings than Northern Hemisphere humpbacks.

2. They Have the Longest Migration on the Planet

Some populations of humpback whales travel as far as 8,000 kilometres worth of open ocean each year, from breeding grounds in warm tropical oceans to more productive feeding grounds in colder waters; they hold the longest migration in the animal kingdom. Preferring colder water for feeding and shallow, warm water for calving, humpbacks will go months without eating while living on stored fat reserves.

3. Not All Populations Migrate

The population of humpback whales that reside in the Arabian Sea are the smallest and most genetically isolated group of humpbacks on earth. These whales are also genetically distinct from other humpbacks, and estimates suggest that they’ve remained isolated from other populations for over 70,000 years. These humpbacks also inhabit the Arabian Sea year-round and do not migrate, sticking to the waters around Yemen, Oman, Iran, Pakistan, India, and Sri Lanka.

4. Their Songs Can Last for Hours

Humpback whale songs, which are only performed by the males, are typically heard during the breeding season in winter but have been recorded in the summer months, as well. These songs are made up of a long series of complex calls that are shared by all males living in the same area of the ocean, despite distances of up to 3,000 miles. While the specific song lasts anywhere from 10-20 minutes, it is repeated for hours at a time. Researchers have found that, as humpback whale songs change gradually over the years, all singing members within the same population will switch to the new song. 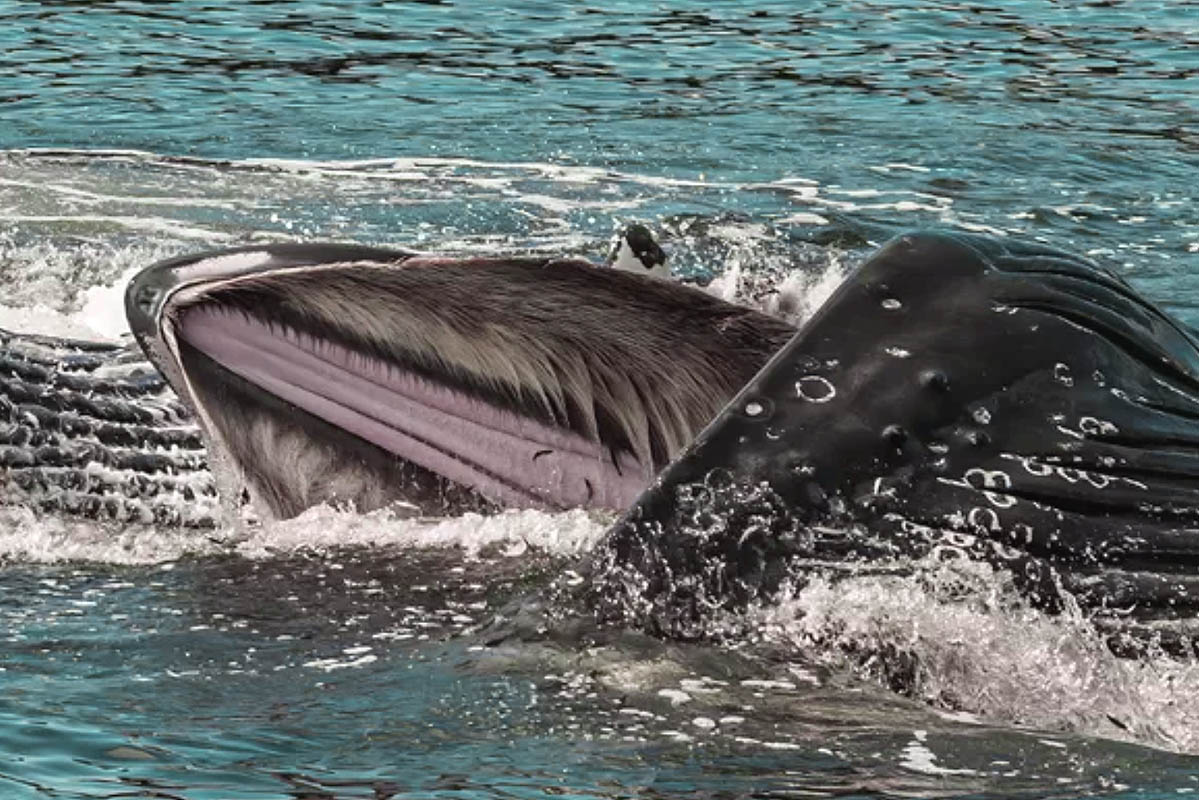 5. Humpbacks Have Baleen Plates Instead of Teeth

Humpbacks feed by straining large amounts of ocean water through fringed overlapping sieves that hang from each side of their jaw called baleen plates. The water is filtered through the plates and then expelled through the whale’s blowholes. Most of their food is composed of tiny shrimp-like crustaceans called krill, as well as plankton and small schooling fish like anchovies, sardines, cod, and mackerel. It’s incredible that an animal weighing between 50,000 and 80,000 pounds with a body length of 60 feet can live off of something so small.

6. They Hunt in Groups

Although humpback whales typically travel alone or in small pods, they occasionally gather in groups to hunt. Some humpback whales in Alaska have been observed using a method called bubble-net feeding, where they dive deep and swim up in a spiral pattern while releasing a steady curtain of bubbles from their blowholes to corral large schools of fish. Once the fish are condensed together and pushed towards the surface, the whales quickly swim upwards with open mouths through the bubbles to catch their prey.

7. They Eat Thousands of Pounds of Food Per Day

In order to store up enough blubber to sustain them throughout winter migrations, humpback whales spend their time eating up to 2,000 pounds of food each day while in colder feeding waters. According to NOAA, humpbacks that live in different regions employ different feeding techniques. In addition to bubble-net feeding, humpbacks have been observed using their pectoral fins and different series of sounds to disorient their prey. 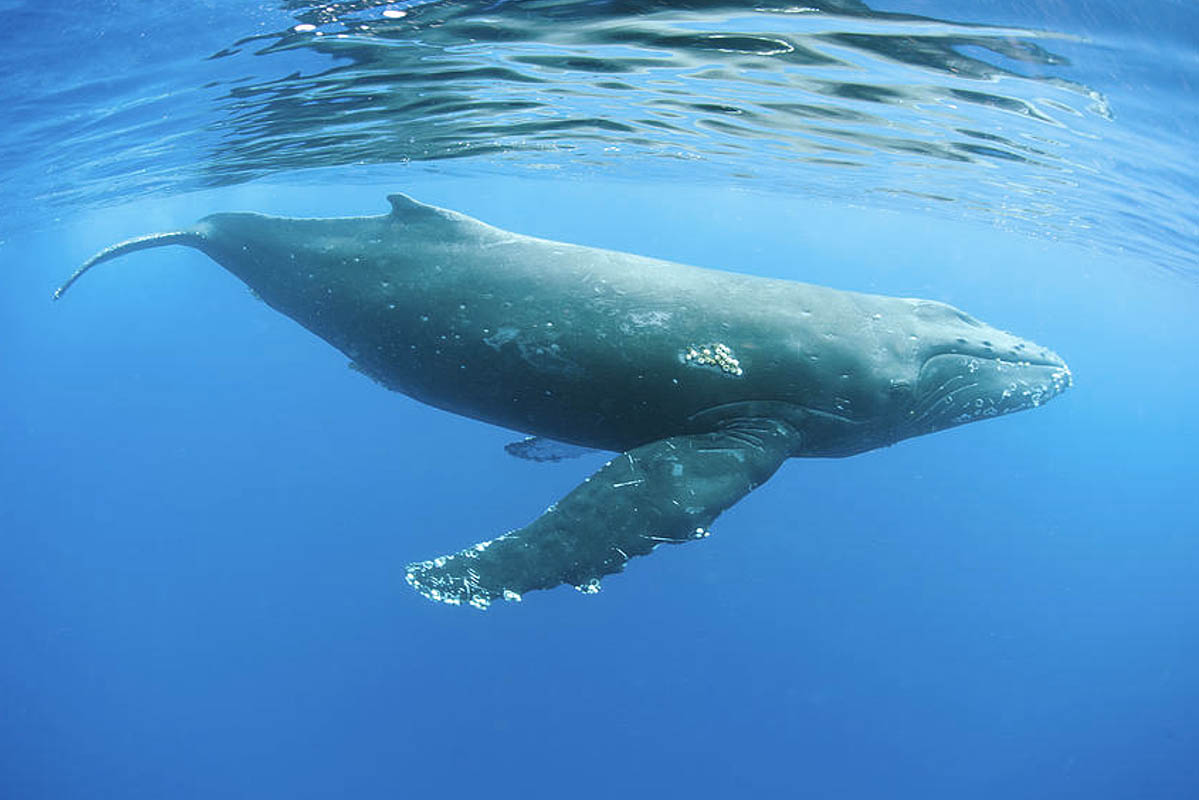 8. Humpbacks Can Live for 90 Years

Since humpbacks are baleen whales and don’t have teeth, it is difficult to determine their exact age. Scientists believe, however, that humpback whales probably live about 80 to 90 years and reach maturity between the ages of 4 and 10. Females give birth every two to three years, producing a single calf after 11 months of gestation. Baby humpbacks are about 13 to 16 feet in length when they’re born, staying near their mothers for up to one year before weaning and setting off on their own. While humpbacks don’t maintain long-lasting relationships with their mothers, they are usually found in the same feeding and breeding grounds as them throughout their lifetimes.

9. Their Songs Are a Mystery

Although it is assumed by marine biologists that these songs have an important role in mate selection, scientists are still unsure why exactly male humpback whales sing. Some believe that songs are used between different males within the same ocean territory to establish identity and dominance, while others think that they are used between males and females as a mating call. It has even been hypothesised that it is a mixture of the two.

Humans remain the primary source of mortality for humpback whales, commonly via entanglement in fishing gear, boat strikes, pollution, and vessel-based harassment (when whale-watching vessels or recreational boats cause stress or behavioural changes in the animals). Before commercial whaling became regulated by the International Whaling Commission in 1985, all global populations of humpback whales had reduced, some by over 95%. Other animal predators of the humpback whale include large sharks, as well as killer whales and false killer whales.

11. They’re a Favourite of Whale Watchers

Humpback whales are known for being one of the most playful species of whale in the ocean. They are seen jumping out of the water (breaching) and slapping the surface of the water with their fins and tails regularly, which makes for quite the show. In the winter months, humpbacks flock to the waters surrounding the Hawaiian islands to give birth. Alaska also boasts large populations of humpbacks that come back to the southern coast regularly each year in the summertime. Keep in mind that it is incredibly important to do research on a whale watching company before booking a tour, making sure that they follow the guidelines for responsible whale watching, contribute to marine conservation, and have boats designed to minimise environmental impact.

Whales were taken off the IUCN Red List of Threatened Species in 2008, when populations started to increase thanks to the commercial whaling ban, which made it illegal to hunt whales for profit (although some whales are still hunted for subsistence purposes in countries like Greenland). It’s hard to measure population sizes when it comes to humpbacks because of their long migrations and large habitat areas, but scientists estimate that 12 distinct populations number 2,000 whales each and two have fewer than 2,000. In places like the coast of eastern and western Australia, it’s estimated that humpback populations have recovered to more than 20,000 individuals, but in the Arabian Sea, there are only about 80. Population estimates suggest that the portion of whales in the North Pacific and Central North Pacific are growing by about 7% every year.

Want to see the Humpback Whales on your own family bareboat charter? Enquire now & learn more about boating around the Whitsundays with Charter Yachts Australia.

This website uses cookies to improve your experience while you navigate through the website. Out of these, the cookies that are categorized as necessary are stored on your browser as they are essential for the working of basic functionalities of the website. We also use third-party cookies that help us analyze and understand how you use this website. These cookies will be stored in your browser only with your consent. You also have the option to opt-out of these cookies. But opting out of some of these cookies may affect your browsing experience.
Necessary Always Enabled
Necessary cookies are absolutely essential for the website to function properly. This category only includes cookies that ensures basic functionalities and security features of the website. These cookies do not store any personal information.
Non-necessary
Any cookies that may not be particularly necessary for the website to function and is used specifically to collect user personal data via analytics, ads, other embedded contents are termed as non-necessary cookies. It is mandatory to procure user consent prior to running these cookies on your website.
SAVE & ACCEPT